The Power of Visual Storytelling

Visual storytelling has been a cornerstone of marketing for years. What worked then works now: We see what we want and we’re driven to buy it.

Perhaps, if anything has changed, it’s what we want from life. That’s where today’s visual storytellers have a chance to not only say “Hey, you can get this here!” but also lead the consumer into a whole new world of possibilities. Below you’ll find 15 of the very best examples of visual storytelling from B2C, B2B, crowdfunding, and SaaS.

When we click onto Modcloth’s homepage, we find ourselves in a world of friendly sisterhood. We see stories of women, like me, who are having the times of their lives. The online retailer presents their visual storytelling as a slider on the homepage. Instead of each slide having its own image, each corresponding to a different sales page or theme, they devote the entire slide series to expanding on one core idea. This spring, that idea was a girls’ road trip.

This series showcases the clothes, but it also tells a deeper story about relationships, female bonding, and a distinctly feminine sense of adventure. These images make us feel part of a tribe of active, vibrant women. After just a few seconds, I’m ready to start planning my own road trip with my best friend.

These aren’t just aspirational advertisements, like those you’d seen in a magazine. These are no catwalk models. Nothing here is impossibly chic, or so stylized that it’s out of reach. That is part of what makes the magic of Modcloth’s particular brand of storytelling. These are stories we could write for ourselves.

Patagonia has one of the strongest brands and most passionate followings. They’re just good people. Every piece of their marketing points to their commitment to quality and a deep integrity and care for the environment. We have no reason to buy Patagonia — you won’t even find a windbreaker in my closet — but we love them as a business. And if even your non-target audience sings your praises, you are clearly doing something right.

Their visual storytelling supports this core story of integrity and environmental stewardship. Each image shows real people (they don’t look like models — it looks like users sending in their photos) enjoying the outdoors, clinging to cliff sides, trudging through snow-covered mountains, or flinging themselves off the sides of yachts in the Caribbean.

These are images that speak to a very specific niche audience. After all, not all of us associate snow, cliffs, or open water with a good time (Jaws? Open Water?). But for their target audience, these are the images that stoke the fires, fill the sails, and send them off into planning their next adventures. 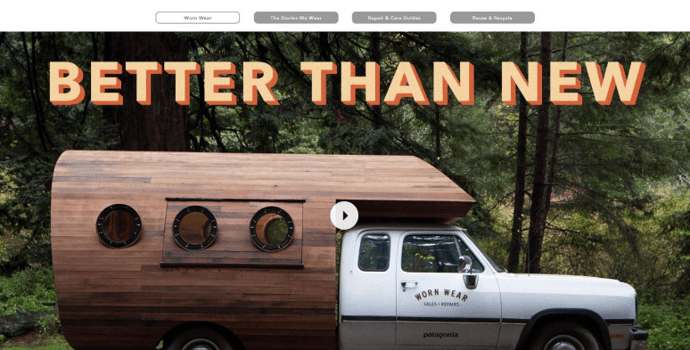 And then there was the Worn Wear campaign. The tagline “Better than new” immediately tells you that this is no ordinary marketing effort. In fact, the “Worn Wear wagon” (pictured above) drives around the country with Patagonia to repair old garments and gear, sell used clothing, and hold DIY workshops. Along the way, they’re also reinforcing the brand’s values and bolstering their community of loyal fans. They spread the word on Instagram, Facebook, Tumblr, and Twitter — all highly visual mediums — for brand followers to meet up and mend their garments.

Seems like everyone is on Slack these days … even NASA.

This single piece of visual storytelling on their homepage speaks volumes. And the story it tells isn’t about team meetings or group chats: it’s about ROBOTS ON MARS!

That’s got to be the most thrilling three words a nerd like me can hear. (Right next to “aliens on Mars,” which would be even more exciting. But robots? Still pretty cool.) And this image, with this perfect tagline, tells me that this product enables teams like mine to accomplish something spectacular.

When we see this image, it’s almost as if I’m putting a robot on Mars myself. I must have dropped my NASA badge around here, somewhere …

Internet Live Stats is part of the Real Time Statistics Project and was created by an international team of developers, researchers, and analysts with the goal to make statistics available in a dynamic, time-relevant way to everyone. Their data-visualization team isn’t too shabby either — it’s one thing to read that there were 7,162 Tweets in a single second. It’s quite another to see it. 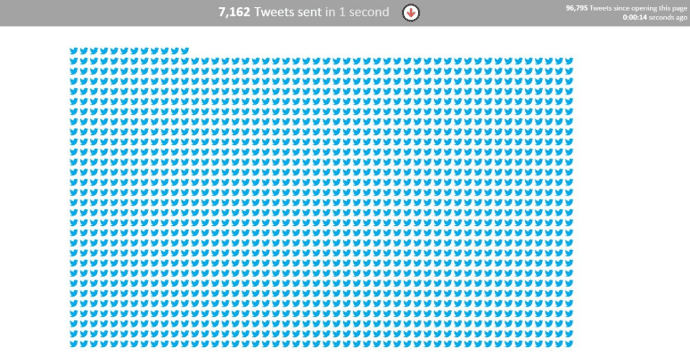 The visual of 7,162 birds is far more impactful than the header saying “7,162 Tweets sent in 1 second.” It’s a different kind of visual storytelling, but compelling nevertheless.

Nick Offerman, best known for his role as Ron Swanson in NBC’s “Parks and Recreation,” is not only an actor and comedian — he’s also an accomplished carpenter. And he’s got attitude. This guy has personality, and it emanates from everything he does. No nonsense. Back to basics. Rugged. Bacon. These are the phrases that resonate for Offerman fans, who won’t bat an eye at paying $145 for a “Build Your Own Damn Stool” kit.

Why? Because you’re buying so much more than a deconstructed stool. You’re filling out a membership card to an exclusive group of unapologetic carnivores, manly men, and people who figure that if an Abacus was good enough for their great-grandfathers, it’s good enough for them. It’s an ideology and a fantasy. And all of it comes through in every. Single. Image.

No smiles. Smiles are superfluous. Give that man bacon and you might get a twitch of the lip.

1001 Knights is a three-volume anthology project, essentially creating a beautifully illustrated set of books that feature a diverse cast of noble characters with feminist overtones. Now, if you’ve ever attempted crowdfunding on Kickstarter or any other site, you’ll know this: Successfully finding an audience and talking them into paying requires a truly stirring plea. And that plea had better include powerful visuals.

This is visual storytelling — literally. 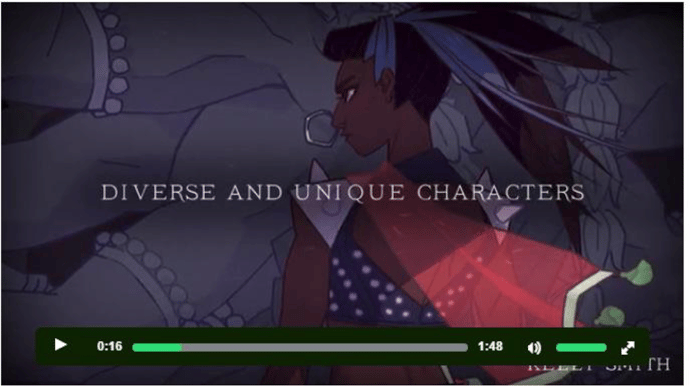 The Kickstarter video’s voiceover is not what draws people in. It’s the images. The promise that these stories are like nothing you’ve ever read, or seen, before. Stories about knights — who are women. Who are complex characters of color. Who embrace the values of wisdom, courage, and fellowship.

You don’t have to read a word of their Kickstarter page to understand these concepts, or to be driven to make your own donation. The images speak for themselves.

Twoodie’s images are easy to recognize — everything is gray except for the toys. Each image tells a story of play. Thought. Beauty. Simplicity. These games aren’t just for fun, they are objects of art. 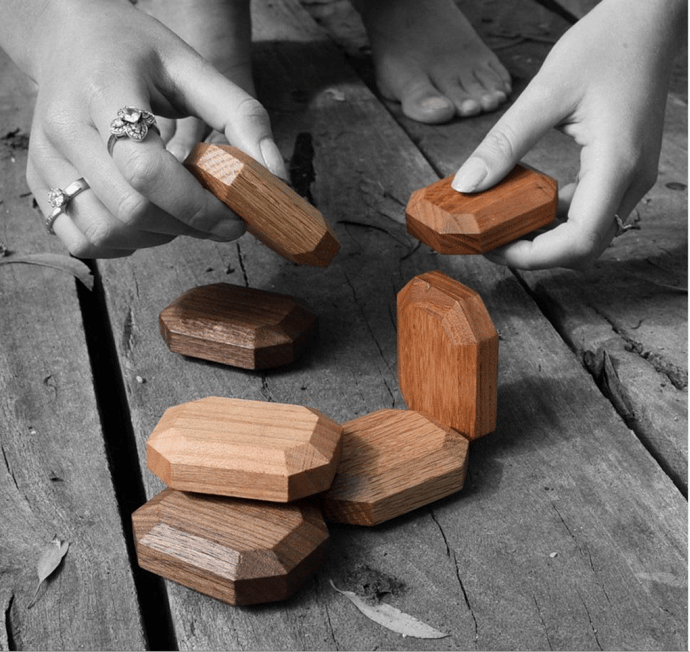 The brand itself is all about simplicity and beauty, which these product photos faithfully reflect. They’re stirring, vibrant, and fundamental.

Their Instagram feed is a visual storytelling masterpiece. Artistry, magic, nature, elemental mystery – it’s all there. Social media is a huge resource for visual storytellers to share their work. 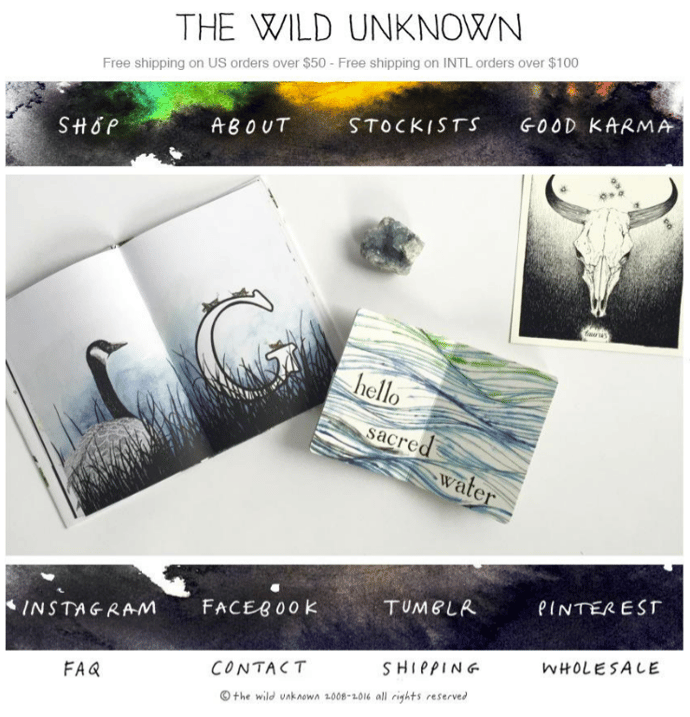 Toca Boca makes really cute and educational apps and games for children. They call their products “digital toys,” and one of their selling points is that digital toys have a number of benefits that physical toys lack: the ability to build bigger, build on the go, share and collaborate, the ability to take risks, and preserve “ever-expanding” creations.

Fundamentally, Toca Boca combines high-tech with the ultra-simple. And their images, with simple shapes and color-blocked characters, are created completely in line with their brand. 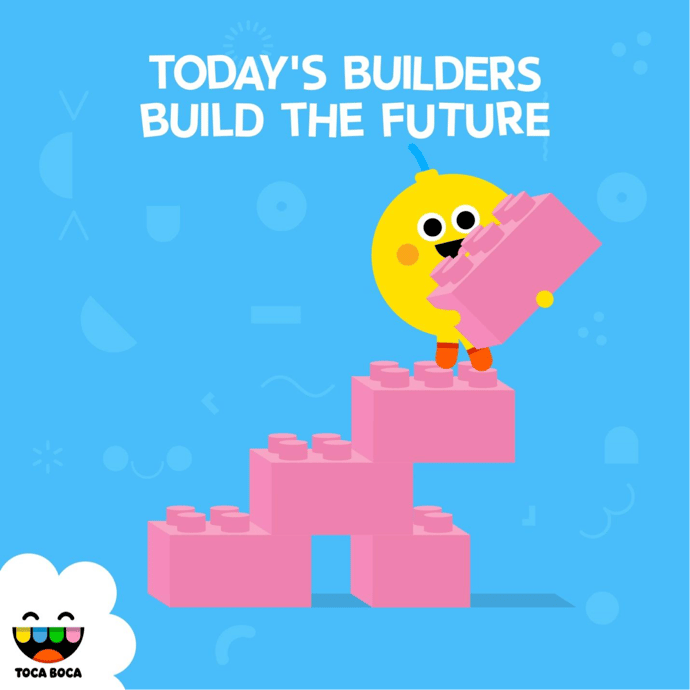 “We create silk garments using scientific open data and creating meaningful partnerships with NGOs working in preserving our Planet or defending Human Rights. For our latest collection, Petit Atlas, we partnered with the World Wildlife Fund and created a limited edition collection that contributes and supports the preservation work they are doing in keeping our oceans clean.”

You can find their most striking visual storytelling on their products page. The models shown sporting these scarves are cosmopolitan, chic, mysterious, worldly, and well-traveled. Their brand is as quirky and unusual as their advertising, which is exactly how it should be. 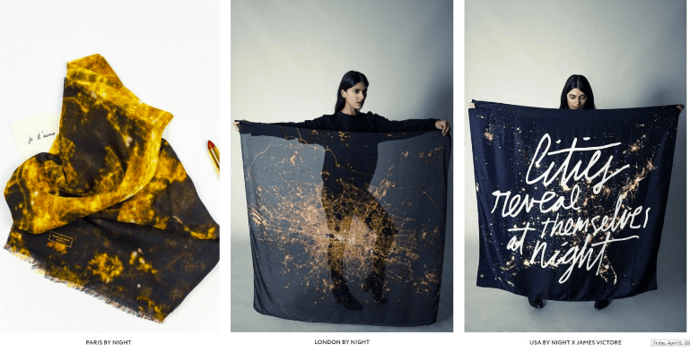 On the other end of the spectrum from “quirky and unusual” is Heinz Ketchup. But that doesn’t mean they don’t know how to tell a compelling story that makes people want to get off of their couches and rush to the nearest burger joint.

The lesson: Not every story needs to be poetry.

Visual storytelling’s power comes from the ability to convey a lot of information at a glance. We would argue that a tactile pop-up book is able to convey even more information. There’s a sense of scale and wonder you get with 3D representations that two dimensions can never quite cover. This pop-up book, for example, contains 16 pop-ups that tell the story of how the large Hadron Collider experiment works. 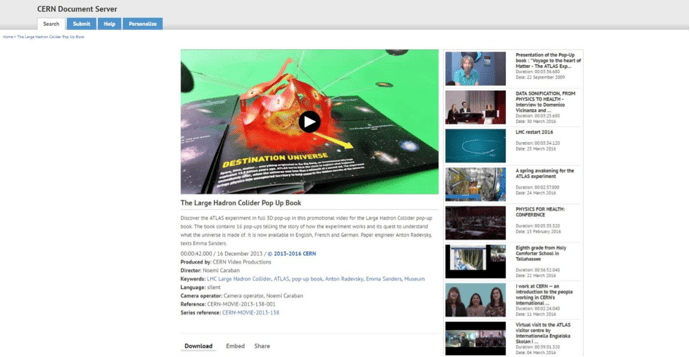 Inkodye allows you to print fabric with sunlight-activated “Inkodye” to create fantastically original designs. The storytelling comes in with their “Recent #inkodye projects on Instagram” feed, where all Inkodye users are invited to post their latest creations. 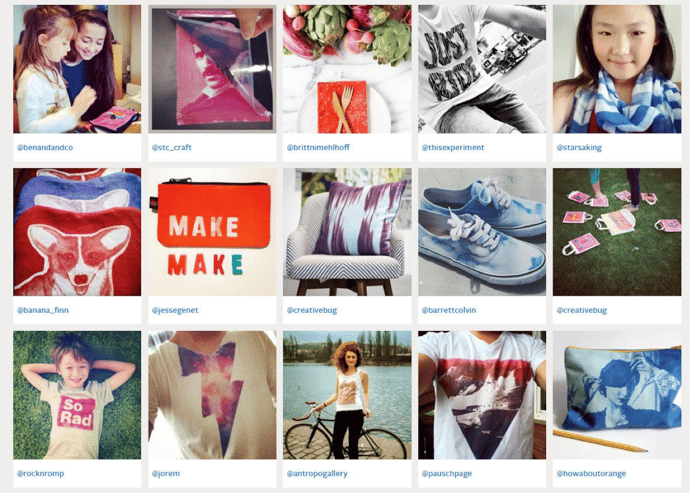 Not only are the images exceptionally artistic, but they also reveal a community of artists, designers, hipsters, parents, and kids, and bring them together through this creative process. When you look through their feed, you can’t help but think: “I want one of those!”

Clearly, this is a community of people who dream outside of the box.

PISTON is a San Diego-based marketing agency that combines striking, thoughtful creativity with the utmost professionalism. And the images they use to market themselves strike this balance perfectly. I love this particular image because it turns the typical stock photography “man in suit” image on its head by including that colorful candy ring.

That’s not a stock image. That’s an image that says “I am the consummate professional — but I can also be fun and intriguing at the same time.”

That ring doesn’t tell a story. It does something even more powerful. It hints that behind that suit and tie is a wild tale, just waiting to be told.

First Round is a venture capital firm that provides seed-stage funding to technology companies. Essentially, startups are their business, and helping the best rise to the top is their mission. At the end of 2015, First Round decided to tell the story of some of these startups. Using data gathered through SurveyMonkey, they used Visage — a very cool visual storytelling tool — to turn those numbers into a design that offers a snapshot of the current startup ecosystem. The result of over 500 responses is 10 insights into what it’s like to run a startup today, illustrated with several types of graphs and charts. 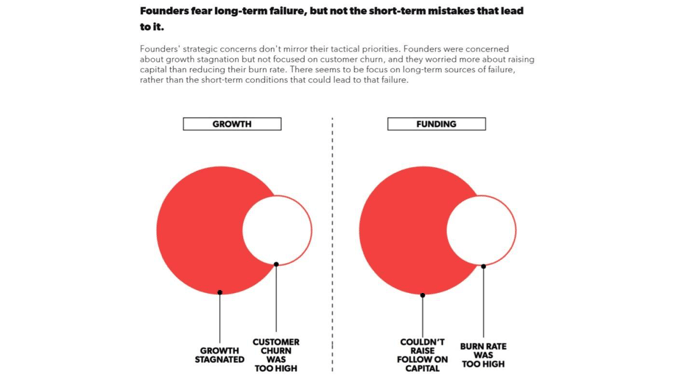 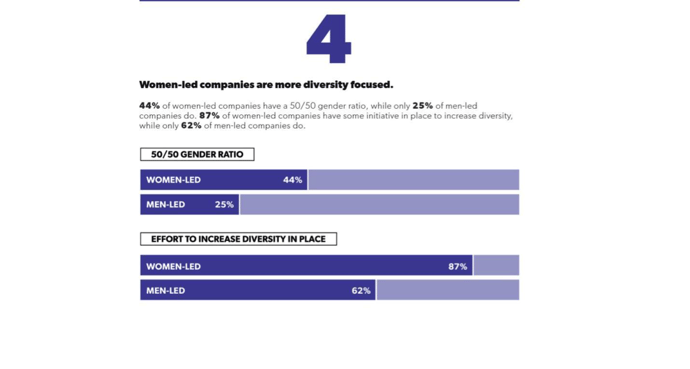 Photographs, maps, and data-visualizations — these are the tools of visual storytelling. But to use them effectively, remember the most important part of any kind of storytelling: The audience.

Whereas ye olde customer was satisfied with a couple of fighting roosters and a pint, today’s customer wants much, much more. Relationships. Time. The promise of a better life. Insights that change their paradigms. And, they want all of these things at a glance.